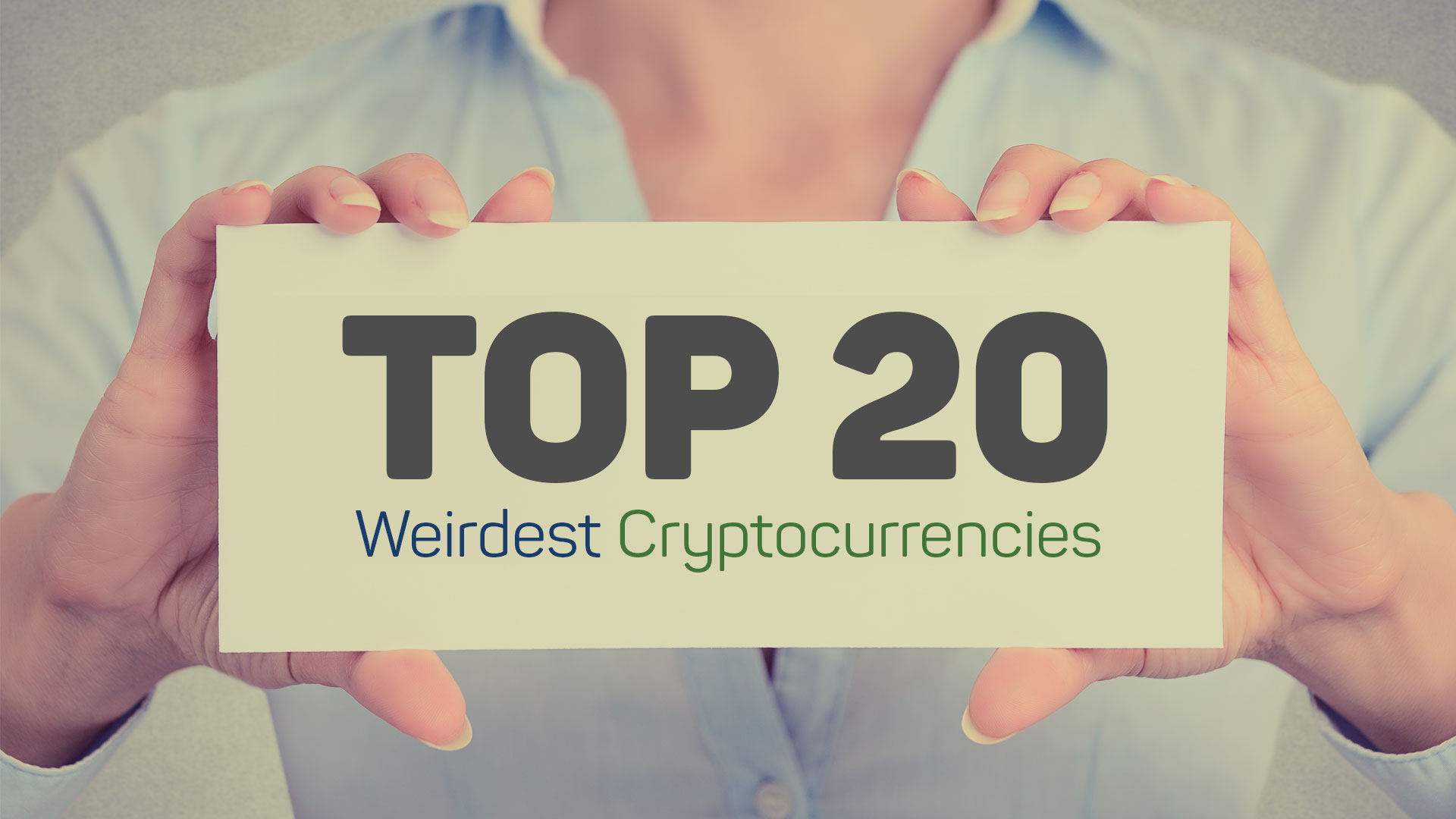 When cryptocurrencies are mentioned, what comes to mind are the most popular ones like Bitcoin, Ethereum, Litecoin, Ripple and so on. With over 4,000 of them in existence today, we want to take a look at the top 20 weirdest cryptocurrencies.

While some of them were merely created for the fun of it, some others are a product of sarcasm. Among them are also those that are outright jokes, while others are just a product of someone trying their hand at blockchain development.

As we consider these coins, there are those whose names you may have heard of before, and those that might make you question civilisation’s intelligence entirely. Representing all corners of the internet, and world in some cases, whatever group they fall into, be assured that these are elements that satisfy the description of cryptocurrencies.

In what looks like a ridiculous attempt, someone on Reddit forked the Litecoin blockchain to create what is called Garlicoin. It is a meme-based cryptocurrency that is devoted to Garlic bread. On the website’s garlic recipes page, it says; "Garlicoin is hot out of the oven and ready to serve you with its buttery goodness."

we’re moving into geography. This coin is based on the average distance between the earth and the moon. This distance is what determines the total supply of the coin. Mooncoin has its own programming language, called MoonWord. This is used for creating decentralized app (DApp) coding and blockchain record-keeping.

It is easy to mistake this coin for a galactic exploration project. Far from that, the UFOCoin simply uses neoscrypt technology to create stronger encryption, offering a stronger layer of protection to the network.

Anyone can mine UFOCoin, even with a desktop computer.

Centred around gifting and parties, Fuzzballs can be used to make purchases from the FUZZ shop. Simple gifts like keychains and bottle openers are available and can be purchased with the coin.

Among the top 20 weird cryptocurrencies is the Useless Ethereum Token (UET). This is an ICO coin that offered its investors and community absolutely no value. It was clearly stated on the project’s website:

"You're going to give some random person on the internet money, and they're going to take it and go buy stuff with it. Probably electronics, to be honest. Maybe even a big-screen television. Seriously, don't buy these tokens."

Catcoin and Nyancoin are the categories of Cat Coins available. They stem from the already popular cat-themed memes on the internet.

This is a community of musicians on a decentralized platform that use FUNK coins to support their collective musical dreams.

This project’s website defines the cryptocurrency as the platinum to Bitcoin’s gold. It is a cryptocurrency designed to be rare. Only 250,000 Unobtanium coins will ever be mined over the next 300 years. Mining of this crypto occurs on the fictional moon of Pandora.

This is a Jewish cryptocurrency token that is made by Jews, for Jews, all over the world. BitCeon has a payments system, loyalty program, marketplace, wallet, and an advertising platform. 10% of the total coins goes to Jewish charities.

This coin is Burger King specific, and is only used in Russia. It is used for buying the Burger King Whoppers. This coin is employed for a blockchain-based rewards program, where users rack up a certain amount of the coins to exchange it for a free burger.

This cryptocurrency lived a short life of only a few months with no well-known use case, before being sued into oblivion by the lawyers of Kanye West.

This is a coin that was simply created to pay tribute to President Vladmir Putin of Russia and his people. Simple!

Among his numerous controversies, this one did not escape the President of the United States of America, President Donald J. Trump.

According to the coin’s website, it aims to integrate itself into the agenda of Donald Trump, and aid in funding projects domestically and worldwide including infrastructure, veterans, and securing the border.

This coin is indeed a cryptocurrency for dentists. It is a blockchain network where dentists and patients can share data and medical records. The platform also allows its users to trade products and materials, and to pay for procedures.

Among the top 20 weird cryptocurrencies is Dennis Rodman’s PotCoin. Its design is aimed at providing decentralized banking infrastructure for the legal cannabis industry. The coin’s blockchain is now growing beyond that and is being deployed for other various solutions.

This is the Venezuelan national cryptocurrency which is backed by its oil reserve. President Nicolas Maduro, who is the lead proponent of this coin, however has given no clear details about the coin. It is one of his measures to try to tackle the highly deteriorated economy of his country, amidst various international sanctions.

Cryptocurrencies are everywhere, including in photography. Veteran camera company, Kodak launched its own coin to help manage processes. Such includes digital image rights and to pay photographers for image usage.

This is a creepy cryptocurrency that was created for the Tor network. It is anonymous and untraceable, which makes it suitable for facilitating transactions on the network.

This is an old cryptocurrency that has been in existence since 2013. Inspired by the famous Shiba Inu dog, Dogecoin has gathered a sizeable community and has been involved in some major events. It is still an active coin with a sizeable market capitalization.

Most of these weird cryptocurrencies are docile, and can be referred to as dead coins. While some of them are still hanging in there, others have already served out the purpose of their creation.

The cryptocurrency market is in dire need of a clean up. Many of these dead coins need to be removed from the system, so that participants can direct their resources to more useful channels. One platform that is helping to achieve this is the CoinJanitor blockchain platform.

The interesting thing about CoinJanitor is that it is not just focused on cleaning up the system, but also restoring value and putting it back into the ecosystem. This is why the project is exchanging dead coins with the more-established JAN tokens.

This implies that those that hold the dead coins now have the opportunity to recover their investments. The non-viable blockchain will be shut down, and its community members absorbed into the CoinJanitor network. Be sure to see some of the top 20 weirdest cryptocurrencies among the potential coin swaps on CoinJanitor.