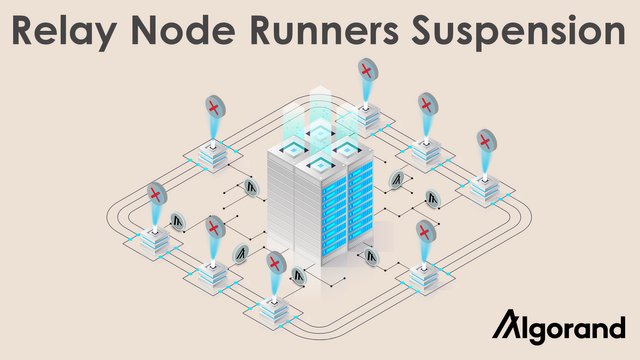 Algorand is a Boston-based open-source software company working towards building a borderless economy. The Algorand community has been recently working on numerous EIPs to improve the Foundation. One of these is EIP-09092019PC (“the Proposal”), which proposes a 30-day suspension of daily rewards for relay node runners. The proposal came about because the community felt that the current relay node reward mechanism was detrimental to the system.

The suspension will allow sufficient time for the development of an improved plan for relay rewards that will be congruent with the long-term vision of the Algorand network. The voting took place between block# 02099600 and block# 02177300, lasting from September 25, 23:59 SGTto September 29, 23:59 SGT.

Depending on how the community wishes to move forward, the relay-node rewards may get suspended for a more extended period, or it may get reduced considerably. Regardless of how the Foundation and the community decide to proceed, this is still a very welcome change. This shows that Algorand is willing to listen to their community's needs and act accordingly.

So, why did the community request this change in the first place? To understand that, let’s backtrack a bit and understand the importance of relay nodes.

Algorand and its Nodes

The Algorand network has two distinct types of nodes:

A node qualifies as a relay node if the following conditions are met:

- The node has been configured to have a publicly-accessible port (4161 by convention) that accepts incoming connections.

- The node’s public IP address (or DNS name) and the assigned port are registered in Algorand's SRV records for a specific network (MainNet/TestNet).

A good quality relay node must:

- Support a large number of connections.

- Handle a vast amount of data which are flowing back and forth from these connections.

This is the reason why relay nodes require a lot more operational power than non-relay nodes. NOTE: All relay nodes are archival.

Why the Community Asked for a Change

As you can imagine, relay nodes are critical to the overall functioning of the ecosystem, since they allow the nodes to connect with each other. To ensure that the relay node runners are adequately rewarded for their services, Algorand used to release a large amount of ALGO tokens per day into the ecosystem.

Many in the community were rightfully worried about this mechanism:

- Releasing a large number of tokens into the ecosystem causes the supply/demand equation to go haywire, creating economic disbalance.

- A potential whale can also lap up these extra tokens and sell them en masse in an exchange, creating massive sell pressure on the market.

Algorand listened to their community and realized that this system needed to change.

On September 9th, the Algorand Foundation received the EIP-09092019PC, from Polybius Capital, which looked to propose a 30-day suspension of relay node rewards. The proposal was carefully reviewed by the Foundation for seven days, following which, it was put up for the vote.

Depending on their vote, the participants were told to send a microtransaction to one of the following addresses:

Participants who abstained from voting were counted as a “NO” vote. If multiple votes were sent from the same address, then the last vote was considered as the final one.

Results of the Vote

Finally, let’s take a look at how the community voted!

Of the node runners earning daily rewards as part of the early relay node running incentive programs, here is the outcome of their votes:

- 53 “YES” votes in favor of the suspension proposal.

- 9 “NO” votes not in favor of the suspension proposal.

Since the proposal was approved by a supermajority (over 50% of the operating nodes), it was agreed upon and passed. The 30-day suspension period was subsequently put in place on October 1, 2019.

What Happens During the Suspension Period?

During the 30-day period, the Algorand Foundation will be working closely with the community and the relay-node runners to work on a new reward mechanism. They will also address the impact of relay node rewards on the long-term supply of the ALGO tokens. Currently, as of writing, not a single ALGO token is being added to the current supply. Regardless of what happens, this Algorand has shown us that along with being a very technically sound project, it is willing to adapt and amend itself to satisfy its community.