CrypCore Exchange - an Exchange that You Trust

Too much power on the part of the issuer: Stable coins can effectively be taken out of circulation at any time by the issuing organization. As an example the Omni Protocol of tether can grant and revoke tokens represented on the blockchain. With Crypcore this is not possible because of the technology that Cryp core is based on.

Over issuance: A big problem with most stable coins is that they are issued the same way central banks issue money, this makes them vulnerable to over issuance and susceptible to inflation. Crypcore will not have this problem because the quantity in circulation is d etermined by the emission logic of the Cryptonote protocol, and is visible to all.

Expensive, slow liquidation & purchasing: Liquidating stable coins can be slow because with most stable coin providers you need to wire money to your account which will incur bank fees. Purchasing can also be slow as you sometimes need to undergo KYC procedures and transfer money which can somet imes take days.

Complex Smart Contracts: For crypto collateralized digital assets like Maker Dai there is a problem of understanding. For regular everyday users the terms can seem unnecessarily complex. Crypcore will implement a very simple solvency equation system with easy to understand equation and parameters. Poor Anonymity with stable coins: Stable coins do not offer any level of anonymity.

Crypcore is forked from Monero which is built on the cryptographically secure and truly anonymous Cryptonote protocol, the Crypcore ecosystem brings together a solvency equation , a pure crypto exchange and the Cryptonote protocol to create a coin which has a stable price with price stability achieved by averaging the collateral increase with price fluctuations . To this effect Crypcore is a stable coin which operates in a fundamentally different way to traditional stable coins, will call it a Dy namic Stable Coin (DSC). Crypcore will earn collateral from the fees charged on the Crypcore exchange, these fees will be added to the collateral of the Crypcore coin thus always increas ing the collateral and maintaining the stability of the Crypcore Price. Crypcore is not to be viewed as traditional crypto currency stable coin but rather a new and innovative approach to achieving price stability in the crypto currency space.

Popular stable coins are pegged against the US dollar and have a 1:1 ratio, Crypcore on the other hand will not be pegged at 1:1 but will calculate the price from collateral held. In that aspect Crypcore cannot be regarded as a stable coin in the traditional sense of the word . Crypcore will be made up of a number of distinct parts working in tandem to maintain the price of the Crypcore coin these will be: Cryp core Blockchain, Crypcore Mining , Crypcore Wallets and the Crypcore Exchange.

The technical details of the Crypcore blockchain are as follows:

Difficulty: retarget after every block based on the last 720 blocks.

Cryptonote offers the highest level of privacy compared to any other cryptocurrency protocol. The version of Cryptonote used by Crypcore is the version forked from Monero and more closely resembles Monero in every aspect. This version uses elliptic curve cryptography using the curve Ed25519, inputs are signed with anonymous group signatures and the outputs are concealed and transmitted to the users anonymously.

To obtain additional information about Elliptic Curves you can study the paper Zero to Monero and the Cryptonote whitepaper. Below you will find a general summary of how Cryptonote works. In Cryptonote the sender takes the public address from the receiver and splits it into two parts, one part of that key is combined with the senders private key to create a shared secret key, this shared secret key is combined with the other half of the senders address to create a one – time destination key. The receiver uses his private key to scan the blockchain and perform computations to determine outputs that belong to him. This way payments are received to one time keys and are unlikable to external observers. 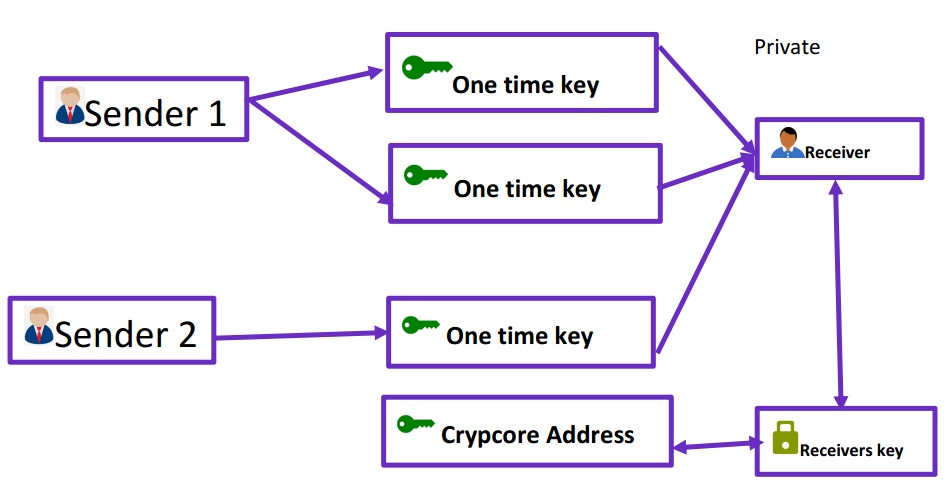 Crypcore aims to be accessible to even non – technical users, wallets will be provided for a wide range of platforms. There will be desktop wallets, command line wallets, hardware wallets and web wallets. After the completion of the Web Wallet development for android and iPhone wallets will begin. The web wallet is currently in development you can find screen shots below. 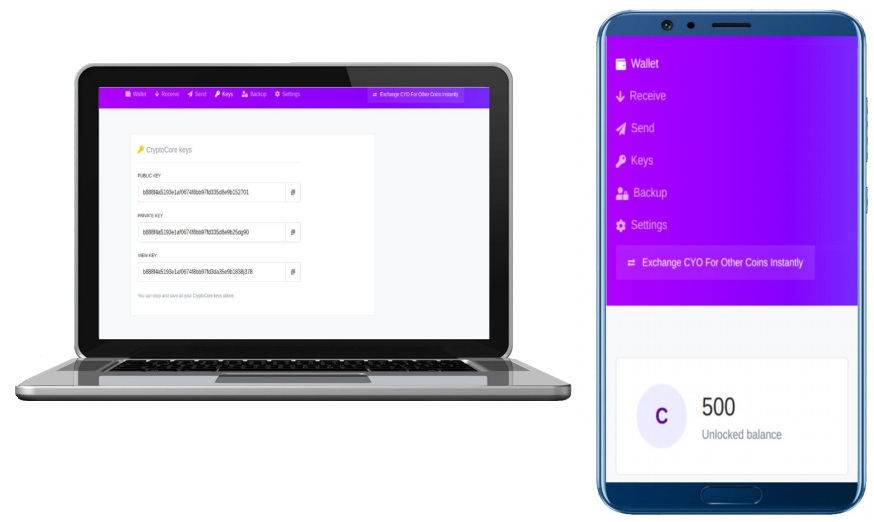 The Crypcore exchange at this moment is an anonymous instant exchange.

Crypcore exchange will charge a 0.1% fee for transactions. 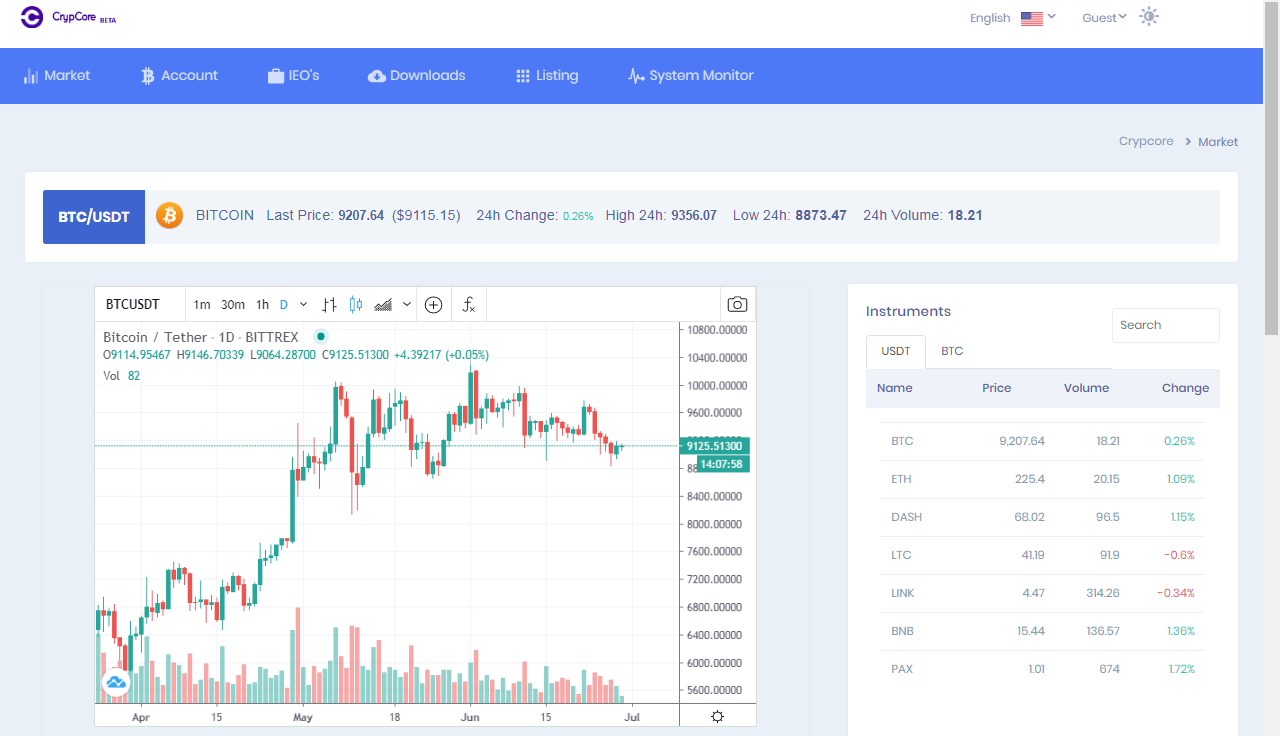 Insurance will also be given to Crypcore Exchange users when there is a catastrophic price drop, are yet to determine the model that this will follow, once that is ready the whitepaper will be updated. 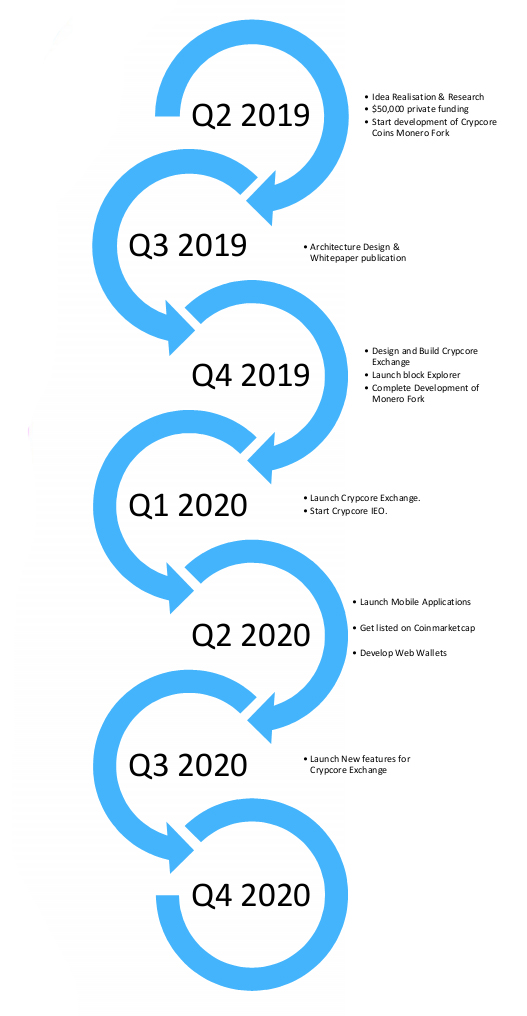