A Guide to RST/RIO Staking on the Realio Platform 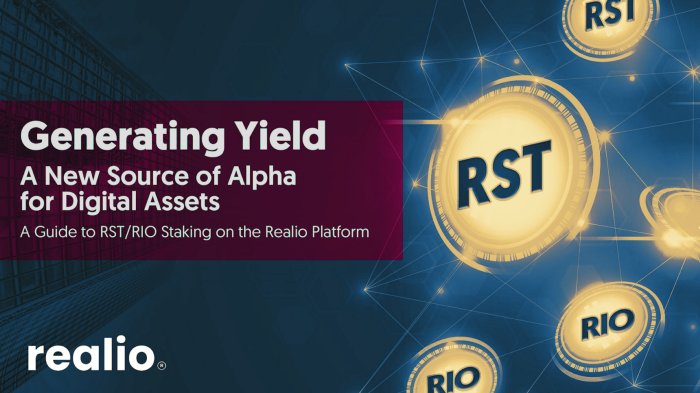 Generating Yield — A New Source of Alpha for Digital Assets

In Q1 2021, Realio plans to release layer 2 of its ecosystem, adding a staking program to the token issuance platform and a “2nd layer” of yield to its digital security RST. This is what you need to know:

With the emergence of DeFi (Decentralized Finance), “yield farming” has been a trending topic in blockchain. While much of what we are seeing under the label of “DeFi” has a distinct 2017 ICO vibe with new projects hitting the market fast and loose in order to catch the hype, we shouldnt lose site of the fact that the ability to incentivize users to contribute value or liquidity to a decentralized ecosystem in a fair and transparent way is in actuality the most fundamental aspect of blockchain (an idea that began with “mining” on the Bitcoin network in order to maintain its distributed nature of honest nodes who are given incentive to do so). Network value is thus inherent in both the incentive and tokenomic supply structures implemented in a blockchain’s design. The Realio Issuance Network (our layer 2 solution) seeks to implement both network level (staking) and economic level (DeFi) incentives in order to extract a new type of yield for our users and redefine the ways in which we invest in real world assets.

The Functions of RST and RIO

In order to grasp the economic logic behind staking on Realio, you should first understand the relationship between the RST and RIO token.

The Realio Security Token (RST) is, as the name suggests, a security token (or digital security) that is being issued in a token sale under SEC compliance. As a security, RST entitles holders to the economic rights of ownership shares in the Realio technology platform, including profit share distributions. Users who hold at least 10,000 RST may also elect to stake them in order to earn a share of the staking rewards (including Super Staking Rewards if purchased in the STO), which are payable in RIO.

RIO on the other hand is Realio’s main payment token and serves as the network’s gas resource for paying transaction fees, as well as token issuance fees and trading fees on RealioX. Any user who holds at least 10,000 RIO may also stake them in order to receive market maker and staking rewards, which are paid out in RIO.

RIO is specifically designed to be a utility token which does not require the same compliance restrictions from SEC regulations as digital securities like RST, such as minimum holding requirements, resale restrictions, or exclusivity to accredited investors. RIO is accessible to anyone, anywhere, and holding it is not subject to any 3rd party controls (just like Bitcoin or Ethereum). As such, RIO has not been sold in a token offering. Instead, an initial batch of the RIO supply (7.1%) has been publicly airdropped, while the rest will be distributed through staking rewards.

Staking will launch with layer 2 of the Realio ecosystem, scheduled in Q1 2021. From this time on, each member organization (token issuers, exchanges, layer 1 members, broker dealers, etc.) of the Realio Issuance Network will run an organization node, which is akin to a full validator node. With a minimum of 10,000 RST, individual users can stake their own peer node (or delegate their stake) within an organization of their choice, while organizations stake a minimum of 100,000 RST. This ensures healthy competition among organizations to offer incentives to individual users to stake within their org. The fee structure for staking a peer node or delegating a stake is set by each organization in a free market system.

This gives them basic access to network level block data, which is viewable in a block explorer. Furthermore, peer node runners will have voting rights within their organization. The organization nodes have the ability to create private channels for OTC markets or to negotiate trades directly with their investor network (ie. an institutional sized private equity company who prefers to maintain a level of control over who has access to digital products they offer). Additionally, they can give the permission to create private channels to their peer nodes.

RIO owners with minimum holdings of at least 10,000 RIO may stake their tokens in order to become a market maker and earn market maker rewards for adding liquidity to RealioX. They may also delegate their stake to an organization node and earn block rewards.

The largest share of the rewards will be paid out for block validation. In the first year, Realio will pay out around 10 million of the RIO supply in block rewards, which is 10% of the total RIO supply. Given that one staking ticket needs a minimum stake of 10,000 RST or RIO, there will be a maximum of around 5,700 tickets available to stake, with around 3,200 potentially eligible for Super Staking Rewards.

If 75% of all tickets (including Super Staking tickets) were to be staked, each ticket would therefore return about 6,500 RIO in the first year. With a more likely number of 50% of all RST/RIO being staked, the payout per ticket will be around 9,700 RIO and with 25% of all RST/RIO staked, the payout per ticket would be around 19,400 RIO. In addition to the block rewards, RST stakers receive a share of the tokenization fees, which are paid by token issuers, as well as their regular revenue share from the Realio technology platform.

For marker makers who stake their RIO tokens, they will be rewarded with the trading fees paid from taker orders in addition to the Market Maker rewards. These fees are variable and, at the current time, are set at 0.1% for every trade, while Market Maker rewards are currently 1% of trade value.

With an active secondary market for RIO, we can make assumptions on yield values for staking RST based on a given price range of RIO and % of overall tickets staked. Please note that this information is purely illustrative for the sake of this topic on “Staking”. The below ROI figures do not include expected returns based on the profitability of the Realio technology platform. Please refer to official offering documents (if provided) for any information specific to the offering of RST tokens.