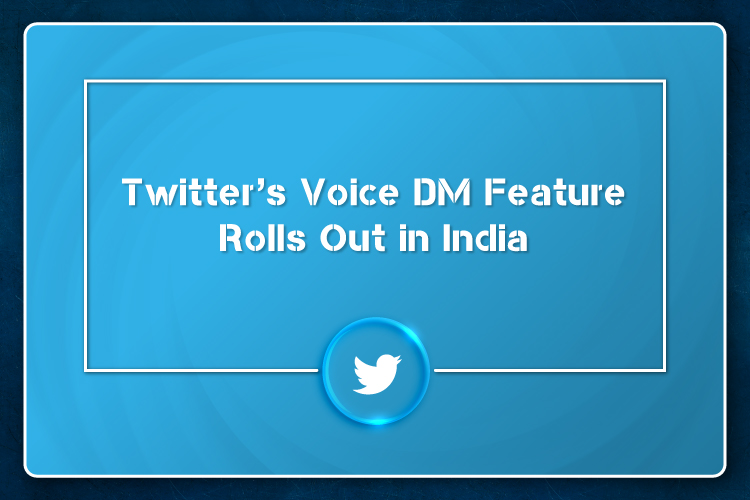 The social networking platform Twitter has launched its new voice DM feature for iOS and Android users recently. According to reports, the company has made the voice “direct messages” available in three countries as of now, including India, Brazil, and Japan. The company had announced last year that it is planning to bring audio messages to Twitter. As per Twitter India’s latest announcement, this feature, which it calls an “experiment,” will be rolled out in phases.

Manish Maheshwari, the managing director of Twitter India, in a statement, said that these voice DMs are meant to provide users with a new way of expressing themselves and helping them connect through subtlety, empathy, and emotion developed by hearing a person’s voice. Similar audio message features are already available on other social media platforms such as Facebook, Instagram, and WhatsApp.

In its latest tweet, Twitter India uploaded a video showing how this new voice DM feature works. Users can record their audio messages by tapping on the small sound wave icon present on the right side of the message box. However, these messages cannot be more than 140 seconds in length. You will also get an option to check your voice message before you send it. Just make sure you have the latest version of the app downloaded on your device.

This feature is only available for iOS and Android users currently, but as per the reports, even though you cannot send a voice DM from the web at the moment, you can still play the audio clips.

Although this microblogging site has customarily been a text-based platform, it has tested several audio-centric features over the past year, like Twitter Spaces, which are voice chat rooms and audio tweets that the company has been testing out on iOS.

Nevertheless, Twitter’s audio goals have been criticized by the users due to their lack of accessibility options. Responding to this criticism, Twitter revealed that it is currently building new accessibility teams within the organization and would be soon incorporating automated captions to videos and audios on the platform this year.

Twitter has been looking to expand its interests from the general 280-character tweets for a while now. The microblogging platform has been experimenting with various features from “Fleets,” a tool to share content that will disappear after 24 hours of posting it, to “Spaces,” an audio chatbox. Now the company is testing another feature that lets users share voice messages on the platform. As of now, Twitter has rolled out this feature for its users in India, Brazil, and Japan. These audio DMs can be up to 140 seconds long. It is not available for web browsers yet but is expected to roll out soon for the same. This new audio DM feature will surely give users a more humane way to express their thoughts and emotions.

Hariom Balhara is an inventive person who has been doing intensive research in particular topics and writing blogs and articles for E Global Soft Solutions. E Global Soft Solutions is a Digital Marketing, SEO, SMO, PPC and Web Development company that comes with massive experiences. We specialize in digital marketing, Web Designing and development, graphic design, and a lot more.