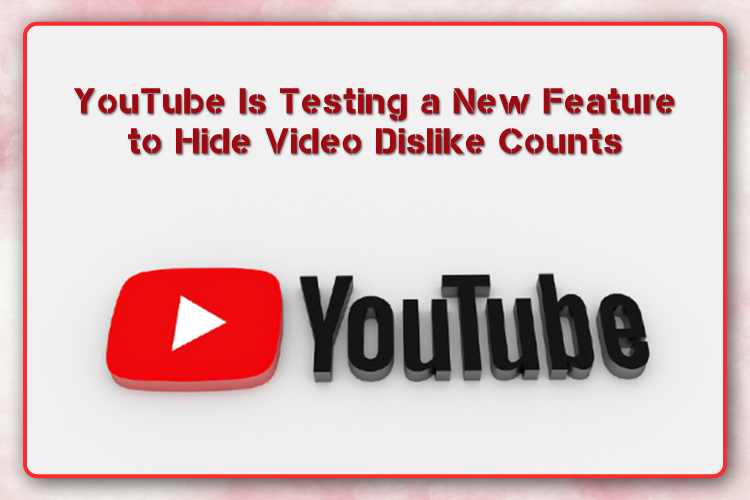 Creating content is no cakewalk, and seeing more dislikes than likes in a video could easily be one of the worst nightmares for any content creator. Moreover, recently internet trolls have begun weaponizing the “Dislike” button to convey their message and mock authentic content. Besides, sometimes these “dislikes” on a video have nothing to do with its content, thus overthrowing the whole point of having a “like” or “dislike” button.

Taking all this into consideration, the video-sharing giant YouTube announced that it is testing out a new feature that won’t display the number of dislikes on videos. While the dislike counts will not be publicly visible, the same will show up inside YouTube Studio only, meaning the “Dislike” button will still exist. In simple words, the viewers can still dislike a video, but since it won’t be displayed publicly, it will help avoid targeted online attacks by internet trolls.

In its recent announcement, YouTube said that the creators will still be able to see the total number of likes and dislikes in YouTube Studio. Viewers who are part of this small experiment will still be able to like or dislike a video to share their feedback with the content creators and help fine-tune the recommendations they see on the platform.

Besides individuals and brands, this “dislike mob” has also created extreme embarrassments for political leaders across the world, with their videos of political campaigns and speeches receiving 10x more dislikes than likes. On the other hand, this announcement didn’t really go well with some people as they started debating on Twitter how YouTube will be suppressing genuine user feedback by hiding dislikes on the platform.

According to reports, in another ongoing experiment, YouTube is testing out a new feature that will auto-detect all the products featured in any video that the user is watching and will show up a list of suggested links related to those detected products. These links could redirect to eCommerce sites or even recommend better videos of the same product to help the users gain more information about it on the platform.

The search giant Google revealed in its Support pages that the company is currently testing a new feature that will automatically detect products in a video and present a list of those products along with other related products. This feature will appear in between the video recommendations to viewers who are scrolling below the video player. With this, YouTube aims to help people discover more videos and information about those featured products on their platform. However, this feature will only be visible to users watching videos in the US for the time being.

Getting more dislikes than likes on videos can be one of the worst nightmares for content creators. The dislike mob and internet trolls are exploiting the “Dislike” button simply to convey their message or mock authentic content. Considering this, YouTube has announced that it is experimenting with a new feature that would hide the dislike counts. While it won’t be displayed publicly, viewers can still dislike a video, and the creators can still see the exact dislike counts in YouTube Studio. The launch of this new feature would undoubtedly make YouTube creators happy. On the other hand, some people also argued that YouTube would actually be holding back genuine user feedback by doing so.

Hariom Balhara is an inventive person who has been doing intensive research in particular topics and writing blogs and articles for Tireless IT Services. Tireless IT Services is a Digital Marketing, SEO, SMO, PPC and Web Development company that comes with massive experiences. We specialize in digital marketing, Web Designing and development, graphic design, and a lot more.