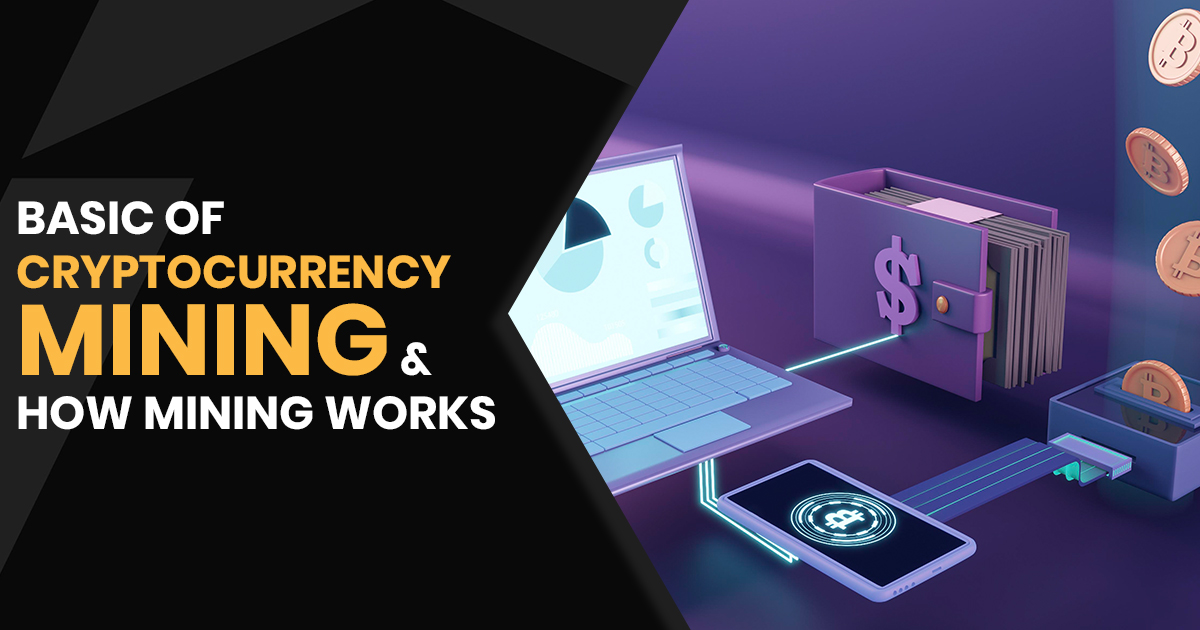 Crypto mining is the process of generating new coins in a specific blockchain network. It involves the use of high-power computer systems to solve complex mathematical algorithms (verify blockchain transactions), as a result of which new coins are generated as rewards for miners.

Miners are the people involved in the process of mining.

The process of mining involves the use of a decentralized network of computers (called nodes) distributed around the world that verifies each transaction, which is essentially an exchange of value, and then add the verified transaction to the block, which when completed is added to the ledger called a “blockchain.” The process ensures the high security of the network and data/records. In exchange for their contribution, miners (computers) are rewarded with new coins.

As the largest cryptocurrency in the world, Bitcoin is also the number one digital currency for mining.

As you may know, a blockchain is a decentralized network where transactions are verified and executed by computer nodes. These nodes or computers are crucial to the working of a blockchain. Apart from verifying transactions, nodes help ensure the security of the network.

Verifying transactions essentially means solving complex equations in order to guess a 64-digit hexadecimal number called a “hash.” All nodes in the network compete with each other to be the first to guess the number, as only the winning node is awarded newly minted coins. The winning node will then complete a block of verified transactions and will add it to the previous block in the blockchain.

As of May 2022, you can earn around 6.25 BTC for every block that you successfully mine in the Bitcoin network. At the time of writing, the value of one Bitcoin was over $31,000, and at its peak, one Bitcoin valued over $65,000 in February 2021. Needless to say, there is much potential in crypto mining and Bitcoins. And mining happens to be one of the best ways to earn Bitcoins and other cryptocurrencies.

If crypto mining is so good, why isn’t everyone doing it?

There are a number of limitations of the crypto mining sector. These include the high entry cost owing to the requirement of high-end mining infrastructure, machines and power, the requirement of a constant high energy source, and depleting rewards.

The idea is to earn more rewards than what it costs to mine new coins. It is only then that mining can be considered profitable. Individual miners with limited computing power are highly unlikely to make any profits through mining, which is why nowadays only big groups of miners called mining farms or companies engage in Bitcoin mining.

There was a time (not more than a few years ago) when crypto mining was not as expensive as it is today. This is because not many people were aware of or were actively involved in the mining of cryptocurrencies. But, as people started realizing the extraordinary power of mining and its capability to grant rewards to participants, the crypto mining space became increasingly crowded. As the blockchain grew, so did the resources required to maintain it. And with high demand, the cost of mining also increased.

On top of that, Bitcoin mining rewards are halved every four years, which means the earning potential of miners is also reduced with time, which is another reason why entry into the mining space is not considered everyone’s cup of tea.

Is there a less expensive way to mine Bitcoin (& other crypto)?

Over the years, we have seen many new developments in the crypto mining space. And I’m glad to tell you that there are now ways in which you can mine cryptocurrencies like Bitcoin (or contribute to it) at a very low entry cost and make good profits out of it. Mr Mint’s MNT Token is a recent example.

When you invest in Mr Mint (for as low as $100), the funds are further invested in setting up mining infrastructure for Bitcoin and other cryptocurrencies. The value of the Mr Mint token (MNT) is backed by crypto mining and will increase as the mining activities and profits rise. Mr Mint is a perfect option for anyone looking to participate in this fast-growing mining ecosystem at a very low initial cost.