Qtum scandal in the world Cryptocurrency 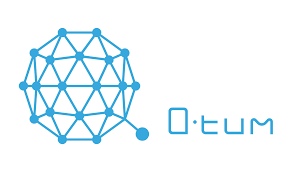 typical article today is dedicated to the fans or prospective investor Qtum Platform concerning the drama scandal unpleasant events happening in the community Qtum Platform. Actually, this scandal has been greater latitude since a few days ago and ane personally had planned to write a chronology of the story. Here ane want to convey Big Credits also to Icocountdown newly released article berjudulkan "Due Diligence Pack for Qtum", which I will use as a basic reference in article writing today.

All events began on February 22, 2017, when the circulation of Twitter posts that states that one of the founder Qtum is the same person involved in the scandal Scam BitBay. 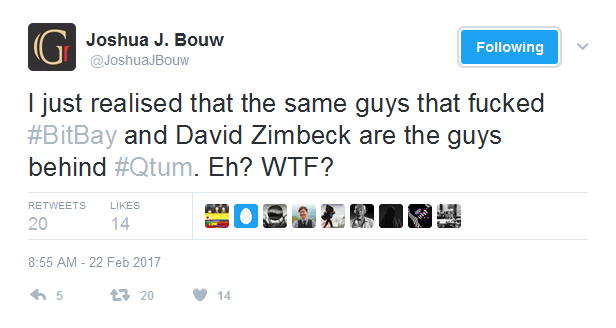 BitBay scandal occurred in 2014, when Bitbay managed to raise funds from investors less 1300BTC in ICO. It is said that that amount will be distributed to five people as a developer for the development Bitbay decentralized marketplace. Wrote a short story, a man named Steven Dai commit fraud by means of carrying off the BTC 200 funds of funds ICO and dump heavily Bitbay his token into the market, then abandoned the project was granted. At the end of the day only one person who became the scapegoat of "David Zimbeck" which until now continue to fight Bitbay, while some others believe to be a founder of the group with Steven Dai. The whole story of David's statement can be read at the following link:

Soon too, the official thread Bitcointalk Qtum start crowded when Patrick Dai (Co-Founder Qtum) is thought to be the same person as Steven Dai (Scandal BitBay) a statement of the Founder BitBay.

Here Elmer Lin one Bitbay investor who've never met Steven Dai in China also said that with Steven Patrick Dai Dai is the same person. Below is photo by Steven Dai ElmerLin next to him, and if we compare Patrick photo Dai in 2017, his face is similar.

2-3 days after that, Patrick wrote pernyataaan who admits that he is Steven Dai (Dai Xu Guang) involved in the project BitBay. In the statement, Patrick said that he saw many problems in Bitbay project that resulted in his having to sacrifice money and time due to the attitude of an individual crime. For that, he left the project in 2015 and hand over its assets to the developer 70BTC Bitbay.

On the same day, the foundation Qtum also released a statement that the entire team Qtum perceive Patrick Dai was not guilty of the events of his past. 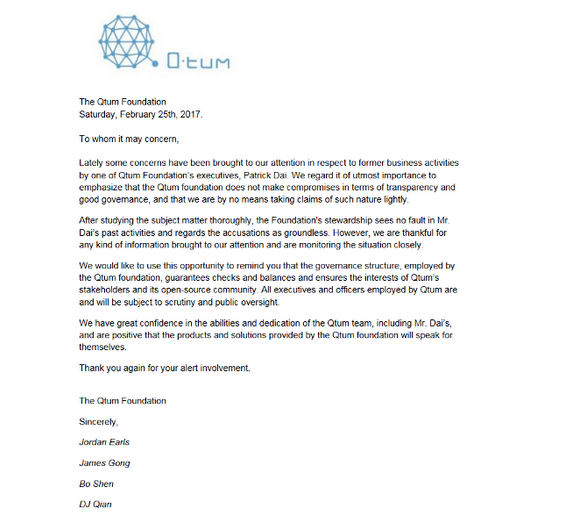 Responding to the statement above, Founder Bitbay (David) also come to speak. By way of demonstrating a series of chat logs between Steven and David in 2014, he stressed that Patrick Dai above statement is a lie. 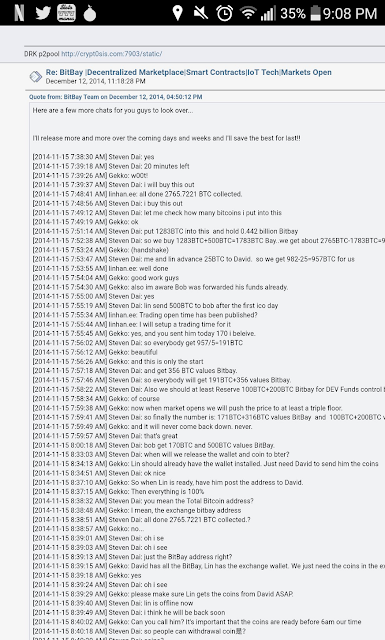 PATRICK DAI BACKGROUND HOW THE TRUTH?

Before BitBay present the first time at the Forum Bitcointalk, a man named XuGuangDai came to David Zimbeck for the cooperative. At that time, David Zimbeck who is a founder Blackcoin, still unaware bahwanya itself will be used as a "scapegoat" as the person responsible for the scandal Bitbay. All logs can talk your own read this linked: IN HERE.... 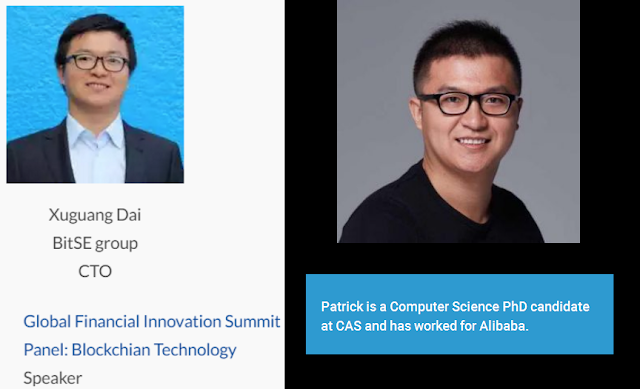 Thanks to the investigation of the crypto community, here we can realize that Patrick turns once had many aliases and was involved with some of the previous projects. For example: he once served as a Co-Founder Tilepay giving false promises, that will be the platform Tilepay leading Bitcoin, where people are able to purchase the data online. All reference sources that support this statement can be checked on the following link:


PWC (PricewaterhouseCoopers), which is one large enterprise in China, become one of the marketing power Qtum, the company supports the project bahwanya Qtum. This can be witnessed through fact-checking on LinkedIn account Chun Yin (CY) Cheung and LinkedIn accounts Yikai Kevin Feng.

Suspicions arise when we conduct checks on the account CY Cheung, where it turns out that account was active do like / comment / post 1 month ago. Moreover, there is no photo on their profile image. Even odder ... the community wonder why the team Qtum tertanya Qtum delete posts the article "PricewaterhouseCoopers involves in the Qtum Project" on the blog Qtum.

Although in the future, the team announced the reason for their Qtum mendeletenya: because want to do a press release simultaneously in several major media, but it seems so far no news goes. Here arises the suspicion whether PWC really support Project Qtum?

Communication between Qtum with the focus more on the community channel slack. Until now, the team Qtum still continue to actively respond to questions from the community. 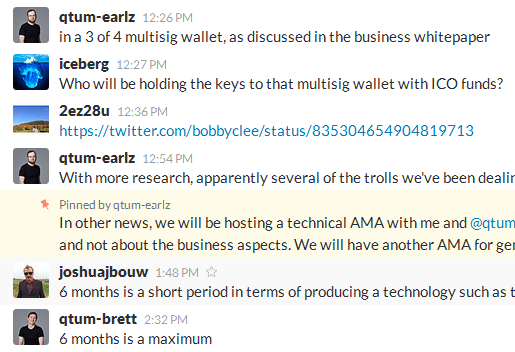 However, while the community members in the channel slack there was less than happy when he gets to know himself dikick of the group. Here below is the statement of one of the founder team Qtum:

For the sake of transparency we would like to disclose that we have banned several accounts which were the same person that created the fake qtum-john account, all using the same IP (and was provably not just a common VPN), user agent, and all had similar ways of speaking. We will continue to monitor for duplicate accounts. There is no need for duplicate accounts to be used in this channel.

According to my personal opinion, Project Qtum was in an area that I can be categorized as "dangerous". Perhaps some Qtum dev team is legit, but nevertheless the case scandals Patrick problems must be solved by clear before ICOnya implemented. The absence escrow is involved in fundraising ICO and not their source code Qtum in Github, showing that the technology promises sounded vague. Especially over again no indication clones on one technology Qtum (crypto throught send email) with BitBay technology features.

Currently, the community is trying contacting cryptocurrency the Angel Investor Qtum like Rogerver, to hear his opinion on this scandal case. Perhaps in the near future, we will get to know how it goes.